Our new single ‘Believe’ was released earlier this week, June 15th.
Featuring Oriana Melissa on lead vocals. The granddaughter of Colombian singer and Latin Grammy Award winner Totó la Momposina, recorded this track at the tender age of 18. Her honeyed vocals gracefully coat the heavyweight rhythm section of Andy Clarke and Mark Spence on drums and bass, propelled along with a superb dub-inflected mix from Rob Smith.

This is the first release that features a live 9-piece band from the collective;

“ Whenever I see the name AMJ Collective I know I’m going to be in for something special ….
something different …. something unique. This song is no exception, featuring glorious vocals
from Oriana Melissa, that was the AMJ Collective and their brand new single which is entitled
Believe, coming out soon on all formats, there is a lovely dub mix of that which we’ll be featuring
for you in weeks to come and you’ll be hearing the song also as we roll through the summer.” Sir David Rodigan (BBC Radio 1xtra)

” AMJ produce yet another fine example of what they do best, new roots music sounds for their latest release “Believe”. With haunting vocals from 18 year old Oriana Melissa fused with killer trumpets, percussion and fine heavy weight drum and bass resulting in a massive timeless summer tune. Brilliantly mixed by the highly acclaimed Rob Smith, I can’t recommend it enough”. Sattamann (Real Roots)

You can purchase by clicking on the ‘Shop’ tab. 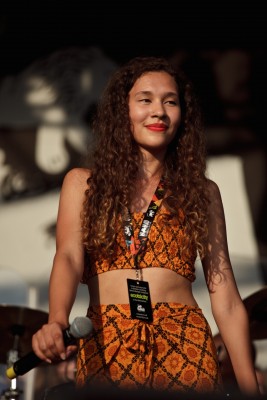